Don't let the lights go out in America... Get smart and take action!... Learn the facts and what to do in A Call to Action for America.
Skip to content
August 16, 2022 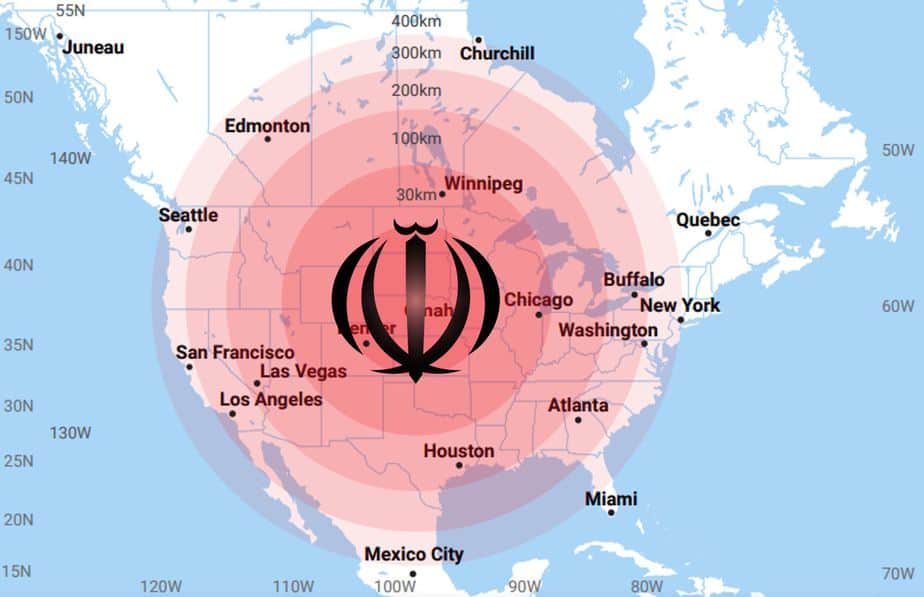 (Image source: The author superimposed the pomegranate symbol from the Iranian flag atop an image created for the Congressional EMP Commission depicting the area affected by a nuclear electromagnetic pulse detonated at various heights of burst over North America and centered on the United States.)

By Tommy Waller – also published by The Epoch Times

This week, the Islamic Republic of Iran reportedly successfully launched a military satellite using the same advanced technologies that guide intercontinental ballistic missiles (ICBMs). Vice Chairman of the Joint Chiefs of Staff General John Hyten did not initially categorize the launch as successful but did confirm the missile “travelled a long way.” Nevertheless, a prominent satellite tracking service now shows the “Nour 1” in orbit, which should be of great concern to the United States.

The type of ballistic missile technology used to launch this satellite could deliver nuclear, chemical, or even biological weapons to “wipe Israel off the map,” attack U.S. bases and allies in the region, and even US and NATO installations as far away as Western Europe. One particular concern about Iran having nuclear weapons and long-range ballistic missiles is the fact that it creates a deterrent umbrella under which the jihadist regime would have a free hand to continue and even escalate their sponsorship and direct support for terrorism around the world. Countries with such a deterrent are less concerned about punitive or retaliatory strikes because of that capability.

Furthermore, Iran’s constitution establishes an explicitly offensive posture, declaring that its military is “responsible not only for guarding and preserving the frontiers of the country, but also for fulfilling the ideological mission of jihad in God’s way; that is, extending the sovereignty of God’s law throughout the world.” Iranian leaders see the United States as its chief obstacle of fulfilling this ideological obligation.

So, if the Iranians do possess nuclear weapons and if the launch of a satellite was indeed successful, the they will have demonstrated the ability to attack even the United States of America, which the regime considers to be “The Great Satan” and its foremost adversary. They could do this through a high-altitude electromagnetic pulse (EMP) attack.

The Congressional EMP Commission has long warned that a single nuclear weapon detonated at a high altitude would take down the U.S. electric grid and all of our critical infrastructures with it. Similarly, on March 28, 2017, The United States Senate Committee on Homeland Security and Governmental reported to the 114th Congress the following:

“A successful nuclear electromagnetic pulse (EMP) attack against the United States could cause the death of approximately 90 percent of the American population.”

The Congressional EMP Commission’s 2017 report titled “Nuclear EMP Attack Scenarios and Combined-Arms Cyber Warfare” provides ample evidence from Iranian strategic writings that the regime in Tehran actively considers EMP as a decisive method of defeating the United States. The report points out a quote from an Iranian political-military journal article titled “Electronics To Determine Fate Of Future Wars,” which stated:

“…Once you confuse the enemy communication network you can also disrupt the work of the enemy command and decision-making center. Even worse, today when you disable a country’s military high command through disruption of communications you will, in effect, disrupt all the affairs of that country….If the world’s industrial countries fail to devise effective ways to defend themselves against dangerous electronic assaults, then they will disintegrate within a few years….American soldiers would not be able to find food to eat nor would they be able to fire a single shot.”18

Since 99% of America’s military installations depend upon the completely unprotected civilian electric grid and the EMP-vulnerable communications systems which undergird this life sustaining infrastructure, this is not Iranian hyperbole.

Moreover, the Iranians need not worry about an ICBM’s accuracy or the effectiveness of the warhead’s re-entry into the atmosphere in order to conduct an EMP attack. If armed with a nuclear weapon, a satellite in orbit around the earth at an altitude of 425 kilometers could produce an EMP field that would cover the entire United States and most of North America. (See cover image.)

The concept of using a satellite to conduct a surprise EMP attack against the U.S. was pioneered by the Soviets in the 1960s in what was known during the Cold War as a “Fractional Orbital Bombardment System,” or “FOBS.” Ambassador Henry Cooper, the former director of the Strategic Defense Initiative, warned more than four years ago:

“….it should be emphasized that Iran’s satellites, like North Korea’s, are launched to the South and approach the United States from over the South Polar regions. To the best of my knowledge, our “homeland” ballistic missile defense (BMD) systems are designed to intercept ICBMs that approach the United States from over the North Polar regions—In effect, we have left the back door open while attempting to lock the front door. 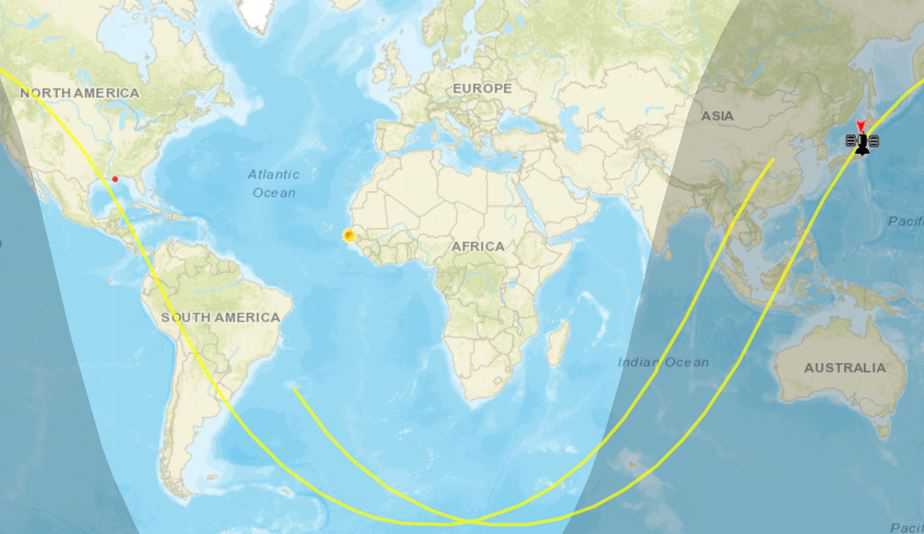 (Image source: Screen capture from a satellite tracking service showing the Nour satellite at 9:06am ET on Friday 24 April, on its second pass over earth. Note that its first pass traveled over the Gulf of Mexico and across the United States on a trajectory moving from South to North.)

The Iranians are not the first to have rehearsed this method of attacking the United States via a satellite launch. The Congressional EMP Commission has warned extensively about North Korea’s KMS-3 (launched on December 12, 2013) and KMS-4 (launched on February 7, 2016) which were both launched into orbit in the same fashion, described by the Commission as “moving from south to north on a polar trajectory that evades U.S. early warning radars and National Missile Defenses, at the near optimum altitude and location to place an EMP field over all 48 contiguous United States.”

Fortunately it is both technically possible and affordable to protect our critical national infrastructures against EMP and both the President (through Executive Order 138652 and Congress (through sections 1720, 1740 & 1790 of the National Defense Authorization Act of 2020) have directed this to happen.

A positive development this week is the release of a study by the Foundation for Resilient Societies, titled “Protecting U.S. Electric Grid Communications from Electromagnetic Pulse” which provides the utility industry many of the intellectual tools it needs to begin this important work alongside helpful suggestions for where it can seek funding.

Since the electric grid is the single most critical aspect of maintaining public health, the President and Congress should consider that the next “Phase 4 COVID-19 stimulus package,” which is supposed to target infrastructure investments, be directed first and foremost toward securing our electric grid against all hazards, including the catastrophic EMP that can be produced by Russia, China, North Korea, and now – possibly – Iran.

Tommy Waller serves as Director of Infrastructure Protection at the Center for Security Policy. Prior to joining the Center, Waller served as a Lieutenant Colonel in the U.S. Marine Corps in the infantry and reconnaissance specialties, with combat service overseas in numerous theaters, and service on both active duty and in the reserves. Waller currently manages the Secure the Grid Coalition—a group of policymakers, defense professionals, and activists working diligently to secure America’s most critical infrastructure—the U.S. electric grid. Learn more at SecureTheGrid.com