I am a private citizen who conducts public interest research on the security of the electric grid because I recognize the absolutely vital role of this infrastructure in powering every one of the nation’s 16 critical infrastructures and in undergirding not just the well-being but the very survival of our modern society.

I request that the Commission issue a public notice of this Complaint pursuant to 18 CFR § 385.206(d), investigate this Complaint and issue an appropriate order to the Electric Reliability Organization (“ERO”) to correct deficiencies.

CIP-013-1 was developed by NERC and approved by FERC on October 26, 2018[5] although the implementation date has been delayed.[6] As of this filing, the standard has yet to be implemented – almost 4 years after FERC directed the standard.

Notwithstanding the bureaucratic delays and onerous process to develop a standard, NERC has demonstrated a lack of urgency in protecting the bulk power system. This was clearly evidenced on February 14, 2019 in the Senate Committee on Energy and Natural Resources hearing entitled: “Hearing to Consider the Status and Outlook for Cybersecurity Efforts in the Energy Industry.”[7]

Sen. King: “Okay let me ask another question. Do any of our utilities have Kaspersky, Huawei, or ZTE equipment in their system?”

Sen. King: “I didn’t ask you if you issued an alert. I asking you do any of our utilities have ZTE, Huawei, or Kaspersky equipment or software in their system?”

Sen. King: “Not to your knowledge. Have you surveyed any of the utilities to determine that?”

In other words, two and a half years after FERC ordered the Cyber Security Supply Chain Risk Management standard, NERC hadn’t even checked to see if there is Russian or Chinese equipment or software installed on the electric grid.

Against the protest of numerous commenters in the docket, CIP-013-1 fails to cover all systems in the bulk power system. Section 4.2.3.5 of the standard excludes:

“Responsible Entities that identify that they have no BES Cyber Systems categorized as high impact or medium impact according to the identification and categorization process required by CIP002-5, or any subsequent version of that Reliability Standard.”

In other words, the standard only covers high and medium impact systems and excludes supposed “low impact systems.” Unfortunately, the discretion is left to the individual companies in the industry to decide what is “low impact.”

On May 4, 2020, the President of the United States declared a national emergency and issued Executive Order 13920: “Securing the United States Bulk-Power System.” This action by the President is a vote of no-confidence in the lackadaisical and inadequate actions of FERC and NERC. The Commission and the ERO have not done enough to protect the bulk power system from cyber threats. This indictment of the lack of action on the part of FERC and the ERO must be remedied.

The Executive order requires that the Secretary of Energy:

This order invalidates the present scheme in CIP-013-1 in which each individual company has the discretion to decide the systems to which it wishes the standard to apply. The president of the United States has ordered the entire bulk power system protected.

On May 21, 2008 Representative James R. Langevin, chairman of the House Subcommittee on Emerging Threats, Cybersecurity, and Science and Technology, in his opening statement to a hearing on cybersecurity[8] noted:

As time passes, I grow particularly concerned by NERC, the self-regulating organization responsible for ensuring the reliability of the bulk power system. Not only do they propose cybersecurity standards that, according to the GAO and NIST, are inadequate for protecting critical national infrastructure, but throughout the committee’s investigation they continued to provide misleading statements about their oversight of industry efforts to mitigate the Aurora vulnerability.

If NERC doesn’t start getting serious about national security, it may be time to find a new electric reliability organization. NERC can begin demonstrating its commitment by incorporating more of the NIST security controls in the next iteration of its reliability standards.

Emphasis added. That hearing was in 2008. Eleven years later, FERC and NERC had still failed to ensure that the mandatory CIP standards addressed the NIST cybersecurity framework. In September of 2019, the Government Accountability Office (GAO) issued a report[9] finding:

The Federal Energy Regulatory Commission (FERC)—the regulator for the interstate transmission of electricity—has approved mandatory grid cybersecurity standards. However, it has not ensured that those standards fully address leading federal guidance for critical infrastructure cybersecurity—specifically, the National Institute of Standards and Technology (NIST) Cybersecurity Framework.

Emphasis added. GAO include this table with their assessment of how well the current CIP standards address the NIST framework: 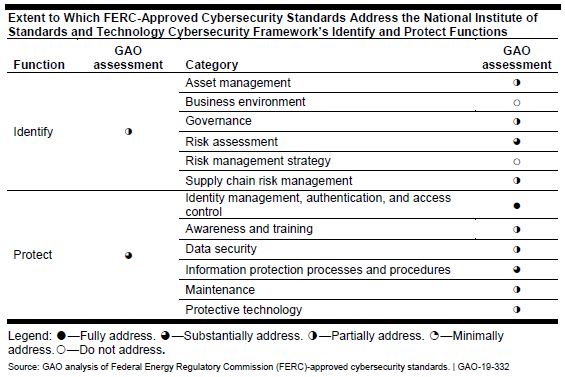 The President of the United States and Congress are not alone in their criticism of the lack of action by FERC and NERC to protect the bulk power system.

On September 6, 2019, Cybersecurity expert George Cotter submitted an assessment in FERC Docket AD19-18-000 and NP19-4-000 entitled “Security in the North American Grid, The Existential Threat. A White Paper.”[10] Mr. Cotter pointed out that:

“only 1374 of a total of 16,412 BES Transmission Substations qualified for CIP Standards based on Kv power minimums (over 90% excluded) and of the qualifiers, only 550 (40%) were estimated by their utilities to be critical to BES Reliability.”

In other words, the vast majority of facilities in the bulk power system are excluded from the CIP standards by their very design.

“China and Russia have directly attacked the control system vendor supply chains since at least 2010. Many of the systems exploited and affected by adversaries are still used in the U.S. bulk and distribution power systems. Moreover, vendors supplying bulk (and distribution) electric equipment for the U.S. electric system also supplied similar (often the same) bulk and distribution electric equipment to other countries, including China, Iran, Russia, and Pakistan. (I include distribution systems, as it often uses the same equipment as transmission systems, and transmission directly “talks” to distribution – more discussions on distribution follows). Even bulk power equipment manufactured in the U.S. often use servers, processors, software, etc. that come from China which makes assuring supply chain integrity so difficult.”

And the supply chain threat is not hypothetical – it has actually happened. In his most recent article,[12] Mr. Weiss points out:

“So why the EO now? Government and public utility procurement rules often push organizations into buying equipment due to price and without regard to origin or risk. In this case, it resulted in a utility having to procure a very large bulk transmission transformer from China. When the Chinese transformer was delivered to a US utility, the site acceptance testing identified electronics that should NOT have been part of the transformer – hardware backdoors. That transformer now resides at a government installation.”

Our electric grid supply chain has already been targeted by state actors, as reported by Mr. Weiss and also by the Wall Street Journal. In a January 10, 2019 article,[13] the WSJ reported:

“A reconstruction of the hack reveals a glaring vulnerability at the heart of the country’s electric system. Rather than strike the utilities head on, the hackers went after the system’s unprotected underbelly—hundreds of contractors and subcontractors like All-Ways who had no reason to be on high alert against foreign agents. From these tiny footholds, the hackers worked their way up the supply chain. Some experts believe two dozen or more utilities ultimately were breached.”

As noted by Congress in 2008 and the GAO in 2019, the Federal Energy Regulatory Commission (FERC) has not ensured that mandatory CIP standards “fully address leading federal guidance for critical infrastructure cybersecurity—specifically, the National Institute of Standards and Technology (NIST) Cybersecurity Framework.”

[3] Attached hereto as Exhibit A.

[8] “Implications of Cyber Vulnerabilities on the Resilience and Security of the Electric Grid.” Before the Committee on Homeland Security, Subcommittee on Emerging Threats, Cybersecurity, and Science and Technology. (110th Congress) May 21, 2008. https://www.gpo.gov/fdsys/pkg/CHRG-110hhrg43177/pdf/CHRG-110hhrg43177.pdf (accessed October 24, 2019). Hearing video available at: https://www.c-span.org/video/?205553-1/security-electric-grid (accessed October 24, 2019).

[13] Smith, Rebecca. The Wall Street Journal. “America’s Electric Grid Has a Vulnerable Back Door—and Russia Walked Through It.” January 10, 2019. https://www.wsj.com/articles/americas-electric-grid-has-a-vulnerable-back-doorand-russia-walked-through-it-11547137112 (accessed May 11, 2020).