Don't let the lights go out in America... Get smart and take action!... Learn the facts and what to do in A Call to Action for America.
Skip to content
January 27, 2022

I filed a FOIA with DHS for correspondence on EMP / GMD

Have you ever, while reading a Senate report, suddenly found yourself compelled to file a Freedom of Information Act (FOIA) request with the Department of Homeland Security (DHS)?

Well, it actually did happen to me.

On June 26, 2017, the Chair of the Subcommittee sent a letter to the Secretary of Homeland Security to express concerns over DHS’s progress in producing a strategy to respond to electromagnetic pulse events, as required by Public Law 114–328. On September 22, 2017, the Subcommittee received a response. Subcommittee staff continued oversight on EMP threats, receiving briefings from DHS and industry stakeholders throughout 2017 and 2018. On October 9, 2018, DHS released its strategy entitled, Strategy for Protecting and Preparing the Homeland Against Threats of Electromagnetic Pulse and Geomagnetic Disturbances.

Well, this is right up my alley! As many of you know, DHS’s lack of action on the EMP provisions of the NDAA FY2017 has been a concern of mine as well (read article HERE) and I have actually written a letter to Congress on the issue (read the letter HERE).

So, I filed a FOIA with DHS for these two letters.

I just received the response on my FOIA with DHS. Interesting to say the least. Here are the two letters that DHS disclosed:

Long term power outages resulting from a disruption to our critical infrastructure could cripple our Nation’s economy and put Americans’ health and safety in jeopardy. Because our critical infrastructure is so vital to our way of life, the federal government has recognized the necessity of securing our infrastructure from an array of risks, including the threat of geomagnetic disturbance (GMD) or an electromagnetic pulse (EMP) attack. We must be prepared for these threats, especially considering that most experts believe it’s a question of when, not if, the U.S. will experience a GMD event due to extreme solar weather. The most serious threat, however, would come in the form of an EMP attack resulting from a nuclear detonation at high altitude, which could cause long-term damage to the power grid. While many believe the likelihood of such an attack is low, the damage and economic aftershocks that would follow demand that we address these risks. We cannot discount that other nation-states, such as North Korea, or sophisticated terror groups might try to utilize an EMP attack to wreak havoc in our homeland.

But, unfortunately Congress has found DHS less than responsive:

The NDAA stipulated that this strategy be completed no later than one year after the NDAA was enacted. The law also requires that DHS provide Congress with an update on the progress no later than 6 months after the NDAA became law — a deadline that DHS failed to meet. Given the severe consequences were an EMP attack or GMD to occur, I was frustrated and concerned to learn that DHS is unsure of meeting the one year deadline, as mandated by the NDAA, for producing the initial strategy to protect our critical infrastructure from the threat posed by an EMP attack or GMD event.

Congress’s frustration with “the grid” is longstanding.

Exhibit A is Senator Angus King’s questioning of North American Electric Reliability Corporation (NERC) boss James B. Robb in a recent Senate Hearing. Here is the video clip of this part:

This exchange between Senator King and Mr. Robb is telling:

Sen. King:  “Okay let me ask another question. Do any of our utilities have Kaspersky, Huawei, or ZTE equipment in their system?”

Sen. King: “I didn’t ask you if you issued an alert. I asking you do any of our utilities have ZTE, Huawei, or Kaspersky equipment or software in their system?”

Sen. King: “Not to your knowledge. Have you surveyed any of the utilities to determine that? ”

Sen. King: “I think that would be a good idea don’t you?”

(NERC Chief James Robb looks like a deer in the headlights during this exchange.)

To me, Senator King nails it: “The Russians are already in the grid.”

Another example of Congress’s frustration is in Senator Ron Johnson talking about the tendency to “admire the [EMP] problem” and not take action. This happened in a separate Senate hearing that I reported on HERE.

We have known about the existential threat posed by electromagnetic pulses (EMP) and geomagnetic disturbances (GMD) for decades. Because most people are either unaware of the danger, or view these as very low probability events, there has not been sufficient public pressure to take effective action to mitigate these threats. Instead, we establish commissions and study panels, conduct research, and develop plans to develop strategies. It is way past time to stop admiring this problem, and actually begin to do something concrete to protect our vulnerable electrical grid, control systems, and the ever-increasing array of electronic devices our society has become dependent upon.

According to Senator Johnson, the time for action is long overdue. And finally he is going to do something about it. At the beginning and the end of the hearing, he emphasized that Dr. George Baker’s written testimony contained action items and Senator Johnson gave “homework” to DHS, DOE, FERC and the electric industry to review Dr. George Baker’s action items and act on them. 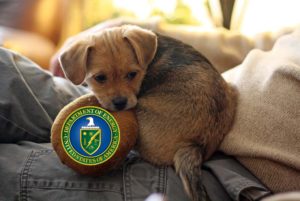 This frustration is exactly why the President’s Executive Order on EMP is so important: DHS, FERC and DOE have not taken the threats to the electric grid seriously enough and the federal government has taken little action to protect us. In fact, since the electric industry largely calls the shots in the self regulatory scheme, what we have here is the proverbial “tail wagging the dog.”

While there have been a few good developments to come out of the executive branch (like these DHS guidelines and this EDTF report), DHS’s response to Congress does not inspire confidence. First of all, DHS’s September 27, 2017  starts off with a snub to Representative Perry. Delegating the response to Representative Perry’s letter down the chain of command lets the Committee know that responding to this letter was not important enough for the “Acting Secretary.” 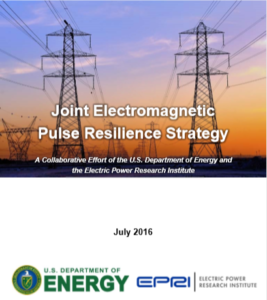 Moreover, in too many cases, the federal government has allowed the industry to propagate false and misleading data – and to imply a federal government endorsement on said “data.” Chief among the violators here is the Electric Power Research Institute (EPRI) who has engaged in a disinformation campaign on EMP. EPRI tries to pass itself off as a legitimate research institution when. in fact. it is a thinly veiled electric industry lobbying group. (Read more about EPRI and their disinformation campaign HERE.)

And the fact the EPRI’s flawed EMP report is applauded by electric industry lobbyist Edison Electric Institute—whose members include the government of the People’s Republic of China—inspires little confidence that this national security matter is in good hands.

How to make that pesky EMP threat disappear

If left unchecked, this dangerous EPRI campaign will continue to endanger the lives of the American people.

An example of this is the July 2016 “Joint Electromagnetic Pulse Resilience Strategy.” The report recommends in the first paragraph:

Such efforts need to be implemented in a thoughtful and consistent manner and need sound scientific information to guide resource allocation and set priorities.

In other words, we should not take action but should admire the problem more. And, of course, EPRI mentions their upcoming EMP study:

The Electric Power Research Institute (EPRI) has initiated a project with its members that will increase the understanding of: 1) overall system impact should an attack occur, 2) power delivery component vulnerability to EMP, and 3) mitigation technology effectiveness, both for hardening and recovery. Deliverables from this study will include: a technical assessment of potential transmission system vulnerabilities and mitigation options; development of a transmission resilience decision support framework; and annual conferences and workshops.

Okay. This alleged three-year EPRI study began in 2016. EPRI had already reached their conclusion at the start of their study. On December 19, 2017 EPRI issued a press release, assuring us that:

New research on the potential risk to the U.S. electric grid from a high-altitude electromagnetic pulse (HEMP) event suggests that service interruption due to the late-time pulse or E3 alone would be limited to a regional level and would not trigger a nationwide grid failure.

In fact, in violation of every legitimate scientific method, It appears that EPRI started with the conclusion that EMP would not cause a nationwide cascading grid failure and then designed the study around that conclusion. EPRI decided from the beginning in 2016 to use a very low estimate of the EMP in their models. The “inconvenient” conflicting EMP Commission reports and the newer 2010 ORNL reports were completely ignored as they did not support EPRI’s (electric industry paid for) conclusion.

DHS must not fall into the Electric Industry’s trap

Here are the facts:

The electric utility industry—specifically NERC, EPRI and EEI—are not allies in protecting the grid. They are proven stumbling blocks and it is time the federal government assert itself to protect the American people.

Renowned Cybersecurity Expert: “ICS cyber security is the second coming of the Maginot Line – and the Chinese have breached it”