The EPRI EMP Study is being billed in the press as an “independent” scientific study. However, it is not. Listen to the experts break this scam down

EPRI is misleading the press and the nation on the danger to the U.S. Electric Grid 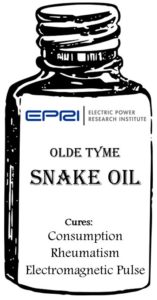 EPRI published their much anticipated EMP Report on April 30, 2019. We discuss several points that are critical to the public’s understanding:

How this EPRI EMP Report is Misleading America

I had previously predicted that EPRI’s EMP Report was going to be a tool for the industry to downplay the EMP threat, and this is precisely what happened. Consequently, Here are some of the press headlines – showing why this misleading report is so dangerous:

The basis for this report (which caused these headlines) is a fraud – EPRI intentionally underestimated the threat so that in their models and tests they could “prove” their conclusion that the grid is not in danger from an electromagnetic pulse attack. (In other words, we are safe as long as our adversaries agree to stick to EPRI’s lower standards in their EMP weapons.)